The great anthropologist Margaret Meade once said: “The primary task of every civilization is to teach their young men to be fathers.”

Pretty heady stuff. And how is that working out for us?

Not so well. The more so-called “civilized” we’ve become, the further from this primary task we seem to have drifted. In the U.S., 17.4 million children lived in father-absent homes in 2014, according the most recent U.S. Census Bureau. This equals the combined populations of New Mexico, Arkansas, West Virginia, Mississippi, Nevada, Nebraska and Kansas. And children living in female-headed homes with no spouse present have a poverty rate of 47.6 percent, according to the U.S. Department of Health & Human Services.

I’m not sure how we change a civilization. But maybe 2018 should be the year we examine our primary task, creating good fathers, at whatever level we can – organization, community, family or individual. How can we go better? How can we do more? How can we up our game? Here is one way, at the community level. See the Billboard initiative below.

Yes they did…through an amazing playoff run, a nail-biting Super Bowl, and a parade for the ages. It was nice to see the city, fans and former Eagles lauded for their contributions to this historic accomplishment. I felt particularly good for two former Eagle standouts, Garry Cobb and Vince Papale, whose support for fatherhood and Fathers & Families are so strongly voiced in the three videos they each made for us. See the Pro Episodes at www.fathersfamilies.com.

Billboard on the Philly Schuylkill Expressway! 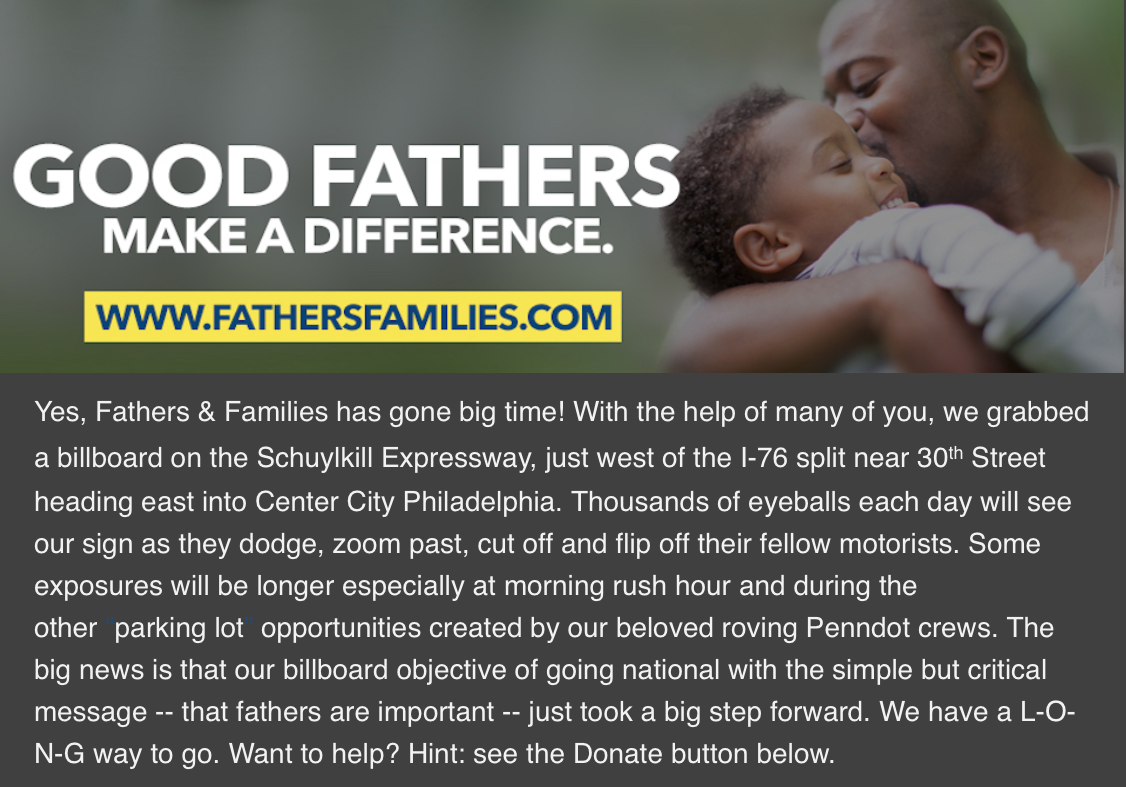 To improve my performance as a father, and help other fathers improve theirs, I will:

Honestly assess my current performance as a father.

This is the fourth of the nine steps in the Fatherhood Performance Commitment. In the first step, we thought through what kind of people we want our kids to become. Honest? Charitable? Resilient? High Character? Passionate? Tough? Independent? In the second step, we asked what we needed to do to help our kids become those people. We looked at our own beliefs and behaviors and asked what kind of models we are for our kids. In the third, we committed to put our kids’ needs before our own. Simply put, they come first. Now, we take a step back and ask how well we’re doing. Honest, unvarnished, straightforward: what are we doing well, where are we missing the boat, and how can we do better?

For more, see https://fathersfamilies.com/fatherhood-performance-commitment/. This gives you the nine steps to become a better dad. If you really want to get serious, look at the Fatherhood Performance Workshop, a free tool to assess your current performance as a dad and develop an action plan for improvement. It is on www.fathersfamilies.com.

Here’s yet another way to examine our primary task, at the individual level.

The National Fatherhood Initiative https://www.fatherhood.org/ is a wonderful non-profit organization that offers programs, research, advice, tools and materials aimed at supporting fathers and their families. Check them out. And download their free app 24/7 Dad to Go. It’s a simple tool that includes a pledge, to-do’s, motivators, and links to other NFI resources. A great way to improve upon your personal performance as a dad, all in support of what Margaret Meade said is our primary task.

Your generosity will help us launch more billboards as we build out our national effort to stress the importance of good dads in the lives of children, parents, and families.